While the Congress chief is actively taking on the BJP, her team remains locked in feud at more petty levels Updates 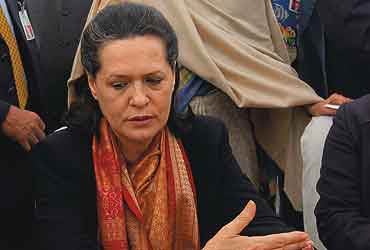 outlookindia.com
-0001-11-30T00:00:00+05:53
Congress president Sonia Gandhi is campaigning harder than she ever has, covering 11 constituencies and travelling 250 km a day over a fortnight. She has taken the battle into the enemy camp, relentlessly targeting Prime Minister Atal Behari Vajpayee and aiming at the BJP's soft underbelly—unemployment, communalism and 'anti-poor' divestment programme. While she is treating Lok Sabha 2004 as a do-or-die battle, her generals seem to have a more complacent view.

The party's second line of leadership is busy taking potshots at each other rather than attacking the BJP—ticket distribution and whisper campaigns being the favourite weapons in this feud within the Congress parivar. General secretaries Ambika Soni, Kamal Nath, Ghulam Nabi Azad and Ahmed Patel, in particular, have come in for ferocious criticism from party workers. "The party may not be in fighting trim, but it is 'infighting'," quipped a Congress leader.

The new coterie of Kamal Nath, Patel and Soni do not see eye to eye with the erstwhile Congress (T), comprising Delhi CM Sheila Dikshit and CWC members...