Saddam a Hitler? Is the US serious? Leave alone something like world conquest, Saddam could not even hold on to Kuwait. 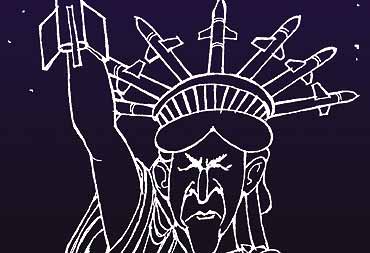 outlookindia.com
-0001-11-30T00:00:00+05:53
As the drums of war reach their inexorable logic, the citizen on our fragile and lonely planet can only feel rage and helplessness. Rage at the looming prospect of the free world being hijacked by a handful of right-wing Christian fundamentalists who, in the name of preserving civilisation and defending American values, are eager and willing to inflict incalculable bloodshed, misery, hatred and turmoil on humanity. And powerlessness (individual and collective) because nothing "the people" say or do will stop those determined to pursue unilateral military action.

Propaganda and indoctrination constantly remind us that in free and so-called civilised societies (where the ballot box is designed to circumscribe the conduct of those elected to govern), majority opinion is both sovereign and sacrosanct. We take immense pride in our democratic institutions, which are mandated to ensure that the will of the people, the will of 51 per cent that is, always prevails. Those not blessed with the gifts of universal adult franchise receive our lofty pity combined with an almost fanatical...