The villain taunts a battered and bloodied McClane: "John, you're a timex watch in a digital age." But that watch keeps on ticking. 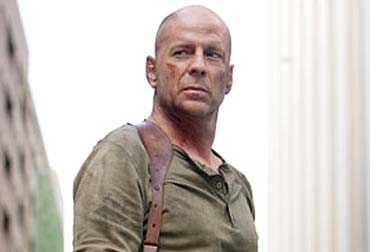 The mood of Die Hard 4.0 is better conveyed by the title of its American release—Live Free or Die Hard—a slogan from the revolutionary war. The story is deeply scored by post-9/11 anxieties about national survival and the ability of patriotic manhood to rise to the challenge of new, inscrutable attackers. This is a 21st century action flick: it pits slow-moving domestic law enforcement against stateless terrorists, targeting civilian infrastructure with information warfare. It stops just short of crashing planes into buildings.

A terrorist group executes a "fire sale", a massive hack-attack that gives them control over all computer-operated facilities in the United States. Traffic lights malfunction, air traffic control networks fail and stockmarkets crash themselves. The terrorists run circles around the befuddled...