Hindi film’s evergreen hero on the Dadasaheb Phalke award, his films and his heroines 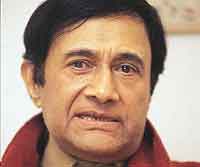 But this is the highest government honour for a film personality.
When you speak of the government, you mean a handful of jury members. People come with their in-built prejudices. I am the last man to lobby for any awards. I don't visit Delhi to be with the powers-that-be.

Are you happy with the honour?
It fortifies my own conviction about my abilities. There's a little more confidence in myself.

You've won a Padma Bhushan earlier.
I was told I was getting the Padma Vibhushan. The next day, it became the Padma Bhushan. Either ways, I was happy.

Will you discover another Zeenat Aman?
Who knows?

You enjoy working with newcomers?
They are eager to work and prove themselves. They reciprocate my discipline and commitment.

Are you a workaholic?
I am intoxicated by filmmaking. Cinema is a movement for me, it's about people, characters.

What interests you other than films?
Films...