Who's she when she's at home? 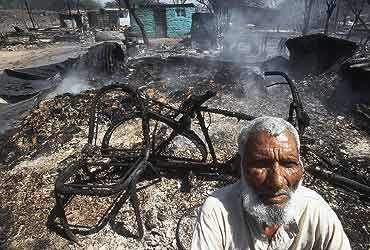 Last night a friend from Baroda called. Weeping. It took her fifteen minutes to tell me what the matter was. It wasn't very complicated. Only that Sayeeda, a friend of hers, had been caught by a mob. Only that her stomach had been ripped open and stuffed with burning rags. Only that after she died, someone carved 'OM' on her forehead.

Precisely which Hindu scripture preaches this?

Our Prime Minister justified this as part of the retaliation by outraged Hindus against Muslim 'terrorists' who burned alive 58 Hindu passengers on the Sabarmati Express in Godhra. Each of those who died that hideous death was someone's brother, someone's mother, someone's child. Of course they were.

Which particular verse in the Quran required that they be roasted alive?

The more the two sides try and call attention to their religious differences by slaughtering each other,...