The violence in Delhi, the role of the police, the stunning spectatorship of the state bring back memories of the 1984 anti-Sikh pogrom in Delhi, though this is in no way comparable, in its spread and extent, to those gory details. But a new generation gets to smell the stench of hatred. 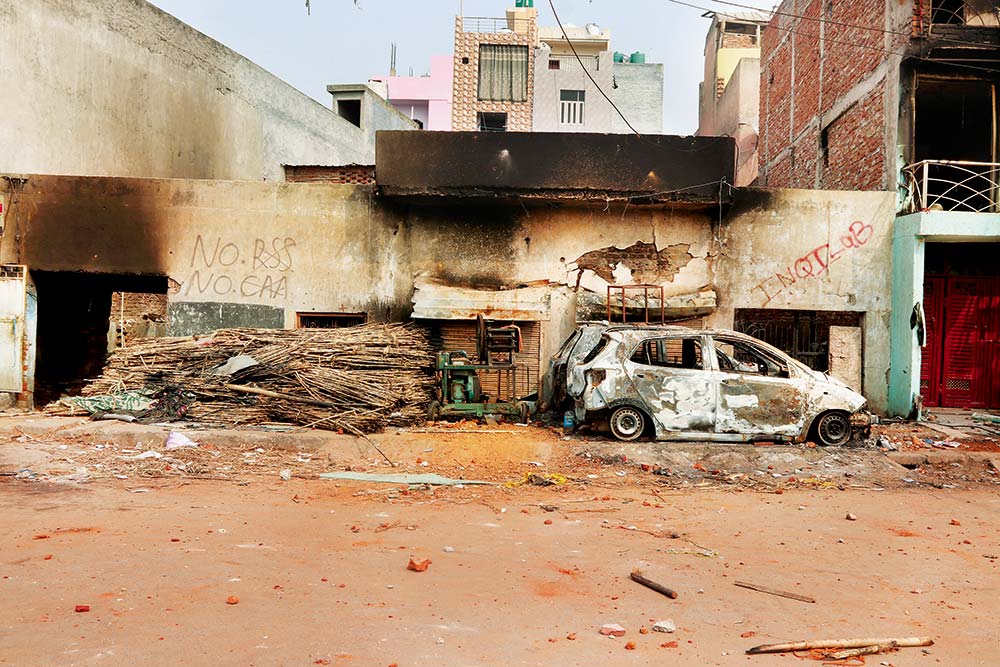 Manmade Hell
A charred car sits on a ravaged street in Karawal Nagar
Photograph by Suresh K. Pandey
Salik Ahmad February 27, 2020 00:00 IST A Walk Through Scarred Lanes Of Delhi In The Aftermath Of A Riot

February 24, 12.15 pm. Donald and Melania Trump reach Sabarmati Ashram in Ahmedabad. Prime Minister Narendra Modi explains to the guests the significance of the place, home to Mahatma Gandhi between 1917 and 1930. The POTUS and the FLOTUS also try their hand on the charkha.

About 1,000 km away, the situation at the Jafrabad-Maujpur area in New Delhi was mutating into a riot. The trigger appeared to be the speech on February 23 by BJP leader Kapil Mishra, who warned the police to clear anti-CAA protesters at Jafrabad and Chand Bagh. After three days and Trump gone, his people wouldn’t even listen to the police, Mishra had said, the police officer in charge of the area standing right beside him.

1:30 pm. “Your nation has always been admired around the Earth as the place where millions upon millions of Hindus and Muslims and Sikhs and Jains, Buddhists, Christians, and Jews worship side by side in harmony…. Your unity is an inspiration to the world.” – Donald Trump at Motera Stadium, Ahmedabad.