A movie on sex workers rubs some the wrong way 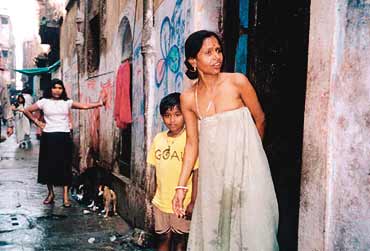 outlookindia.com
-0001-11-30T00:00:00+05:53
There's a point in his career where an otherwise intrepid filmmaker has to pause before he leaps. It is usually when a subject dealing with a sensitive issue disturbs his creative stillness. He has to make a choice. Make documentaries that win polite praise but no one sees, or risk a commercial venture that is daringly original but can, surely, spark a row—as has happened with Buddhadev Dasgupta, prize-winning director of films like Bagh Bahadur, Tahader Katha and Charachar.

The auteur finds himself at the centre of an unwanted controversy over his latest Swarna Kamal winner, Mondo Meyer Upakhyan (The Tale of a Naughty Girl), which deals with the lives and struggles of sex workers trying to find a place in a society that does not accept them. Made last year and released this August 15, it's running well in three Calcutta halls and doing good business abroad.

However, activists of Durbar Mahila Samanwaya Committee, an ngo that has done good work among the city's sex workers in recent times, are highly critical of the movie. It's a rage in...