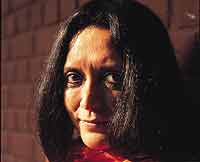 It's been a traumatic time for you.
Water's journey has been traumatic but finally very satisfying. I came to terms with its disruption. My creative output wouldn't have been complete without finishing the trilogy.

The last Indian film to be shot in Colombo was Mani Ratnam's Kannathil Muthamittal.
I watched that and other films shot there and thought of Colombo as a location for Water. There were no hassles in getting permission for shooting.

Did you ever think of shelving the project?
I let all the fear and insecurity play itself out. I couldn't stop myself from doing Water just because some people would read political statements in it.

What made you choose Lisa Ray?
I had worked with Lisa and I thought she suited my heroine Kalyani's character to perfection.