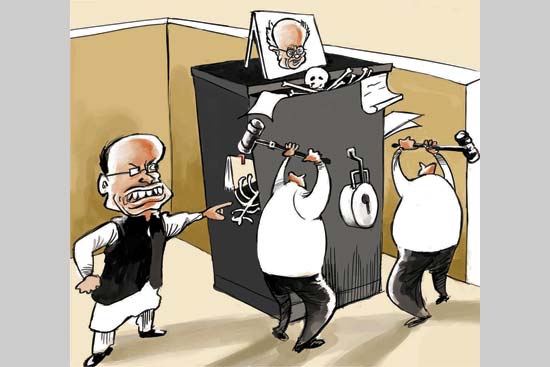 Heard: RSS circles atwitter about an under-performing Union minister who met the PM with kids in tow to suggest their future was at stake

Overheard: At a top Congress meet, Rahul Gandhi says someone in the room had helped Amit Shah get off the hook in the encounter cases

Madhya Pradesh
Dig Up The Dirt

MP bureaucrats are vying with one another to dig out cases aga­inst former chief minister Digv­ijay Singh. Archived files are being dusted off, various projects sanctioned during his time are being scrutinised, all to identify anything that may indicate wro­ng­doing on the part of the AICC general secretary during his 10-year stint in the ’90s. Pre­s­ent CM Shivraj Singh Chauhan perce­ives Diggy raja as the fountainhead of most of his troubles vis-a-vis the Vyapam scam. A case has already been registered against Digvijay for “illegal” appointments made in the...