The ex-Delhi Police ASI is now mayor of Hounslow 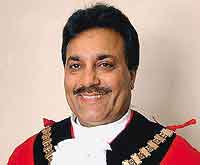 outlookindia.com
-0001-11-30T00:00:00+05:53
Delhi Police to London—a long journey?
Yes, it triggered off when I took action against encroachments by mayor Mohinder Singh Saathi's brother-in-law. I was transferred. I decided to leave.

Where were you posted during the '84 riots?
At Tilak Vihar. I tried to help the widows there.

Why London?
My wife is British.

So you came to London to join the police?
No, I lived a few weeks on state support. Then in 1989 I started work with a catering company.

And what brought you into politics?
At this catering firm our Asian ladies had to ask for the supervisor's permission even to go to the toilet. I raised my voice against this. They made me a union leader.

How did you get to the Hounslow council?
I worked with Trade Unions Congress and they suggested I join the Labour Party. I got hundreds of new members in. I was elected councillor.

Proud of that big metal garland you wear as mayor?
It's just out of service to people.