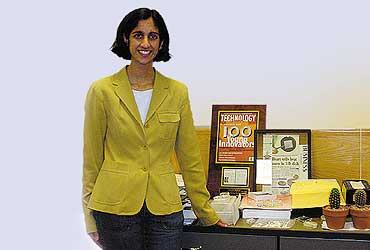 outlookindia.com
-0001-11-30T00:00:00+05:53
Indians who grow up in America often feel pressured to join the ranks of doctors and engineers. Tejal Desai’s father, an engineer by training, tried to dissuade her instead. It’s a good thing he didn’t succeed because Desai’s groundbreaking work in bioengineering could eventually help diabetics do away with their daily injections.

Desai works with very small machines that can enter the body to treat diseases. They are unique because "they don’t just deliver the drug but also find the right target", she explains.

Desai, who grew up in Santa Barbara, California (yes, where the soap opera is set), was equally interested in science, literature and sociology in high school. In tenth grade, she was selected for a summer course during which she met women in the burgeoning field of biomedical engineering, and was hooked. She went on to get an undergraduate degree in biomedical engineering, with a minor in political science, at Brown University. She received her PhD at the University of California, where her advisor was studying drug delivery.