What's so spontaneous about an attack that leaves only the seventh shop on a crowded street burnt down? 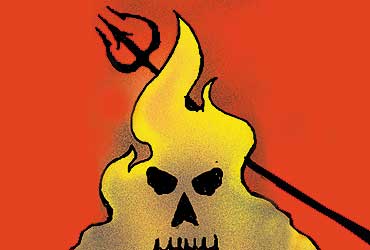 outlookindia.com
-0001-11-30T00:00:00+05:53
They came swooping down on us like vultures lunging at a carcass. There were at least 20 of them, faces remarkably indistinguishable. In fact, frenzied though these men may have seemed on your TV screens, they had an almost robotic, rehearsed air about them as they thrust their gleaming swords into our windshield and barked, "What's your religion?" There was only one answer to that. "Hindu," I said (aware that an articulation of my agnostic beliefs would guarantee the unspeakable), privately cringing for my cameraperson Ajmal Jami. What would we do if he were asked to produce an identity card? For the rest of the journey, we mentally made up false names for him, and avoided addressing him in public. In the mob was a 10-year-old boy clutching a bottle of petrol as if it were life itself. "What are you going to do with this?" I asked later when our religious credentials had proved respectable enough for conversation. "It's for self-defence against them," he said.

But along the hundreds of kilometres of (completely unguarded) highway that we travelled there was no "them"...