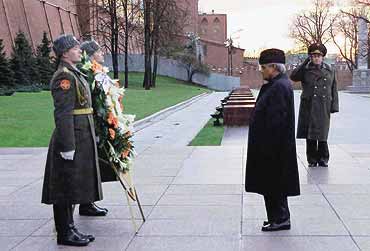 At the Unknown Soldier's memorial friends in need

outlookindia.com
-0001-11-30T00:00:00+05:53
Prime Minister A.B. Vajpayee ended the Moscow leg of his tour securing crucial support for India's stand on Afghanistan and Kashmir, besides opening new vistas for strategic cooperation with Russia in the energy sector. The Moscow Declaration on terrorism also indicated how close the two sides have moved on a problem that plagues both Russia and India. Vajpayee also pushed aggressively for a greater Indian say in Afghanistan, post-Taliban.

Both sides saw the November summit as an important part of their individual image-building efforts. While Russia wanted India to stop thinking about it as a non-market economy, India attempted to get rid of the traditional image of being the land of "tea and elephants", a perception still dominant here. Interestingly, a poll conducted ahead of the Vajpayee visit by the Moscow-based Obschestvennoye Mnenie (Public Opinion), a non-government foundation, showed that few understand India's real standing in the world. More than 80 per cent of 1,500 people polled called India a "friendly country," but 25 per cent of respondents said they think of...