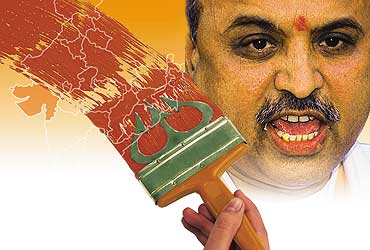 The BJP is buoyant, the VHP euphoric, the RSS quietly satisfied and the Congress defeated and challenged. The Gujarat verdict means different things to different people. For the Hindu right, it definitely is a shot in the arm. Does this then mark the second coming of Hindutva? Will the Hindu charge now be led by Narendra Modi and Praveen Togadia? Are they the new messiahs of the Hindu rashtra? The VHP believes so and warns of repeating Gujarat and harvesting Modi clones across the country. A triumphant Togadia thundered in Delhi last week: "We'll make a laboratory of the whole country. This is our promise and our resolve.... The stage is set for the real Mahabharat in Delhi." BJP leaders were more circumspect, but no less a figure than Prime Minister A.B. Vajpayee did a U-turn last week when he accused Muslims of not adequately condemning Godhra. A sign of the PM's joining the more rabid elements of the right?