The padlock is fitting—he's found his gal. Finally. But doesn't the very act make him the wrong guy? 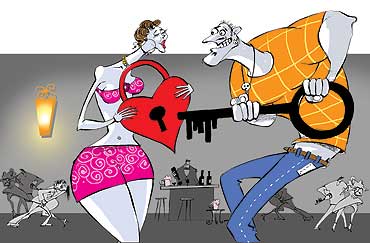 bangles. Or her stand-back politeness; some chaps never do. She'd done her bit, looking only towards him, not at him, eyes in a wide-angle mode that declared erasure of this advancing object. The subtlety was wasted, he had the look of self-defeating determination men sometimes sport in the face of a woman they fancy.

He fumbled around with the key, angling it this way and that by her bangles, and as symbolism would have it, it did not fit. He tried a little longer than necessary to allow some accidental touching. She winced. "It's not fitting," he said, with an embarrassed cackle intended as laughter. She made a point of maintaining a look away, and that finally fenced him off. He should never have tried. It was another of those tragedies, wasn't it, that the guys smart enough to pick up a subtle message are probably the only ones you wouldn't want to give them to.

But she couldn't complain about the...