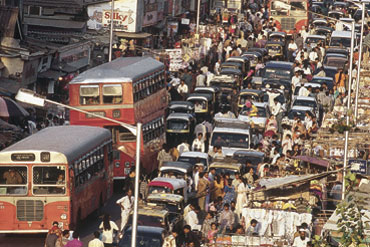 outlookindia.com
-0001-11-30T00:00:00+05:53
"And this is a city
In name, but indeed
It is a pack of people
That seek after meed
For, officers and all
Do seek their own gain
But for the wealth of the commons
Not one taketh pain
And hell without order
I may it well call
Where every man is for himself
And no man for all"
—Robert Crowley, on 16th century cities

The Mumbai of the new millennium uncannily fits Crowley’s description of the bleak pitiless cities of Europe four centuries ago. Here is a city bursting at its seams. The current population is a scary 11 million. By 2015, it will be the world’s most populous city with a staggering 28.5 million people. The civic infrastructure for this 4,355 sq km city of slums and high-rises has already been stretched to breaking point. Suburban trains, the city’s lifeline, are packed four to five times their capacity. Minimum housing quality remains out of reach for a huge majority, with half the population living in slums. The liberal, secular moral fibre Bombay prided itself on has been torn asunder....