Brothers, spouses, and relatives worked together to grow new businesses in the past 25 years. As did the lone rangers, including former professionals and retirees 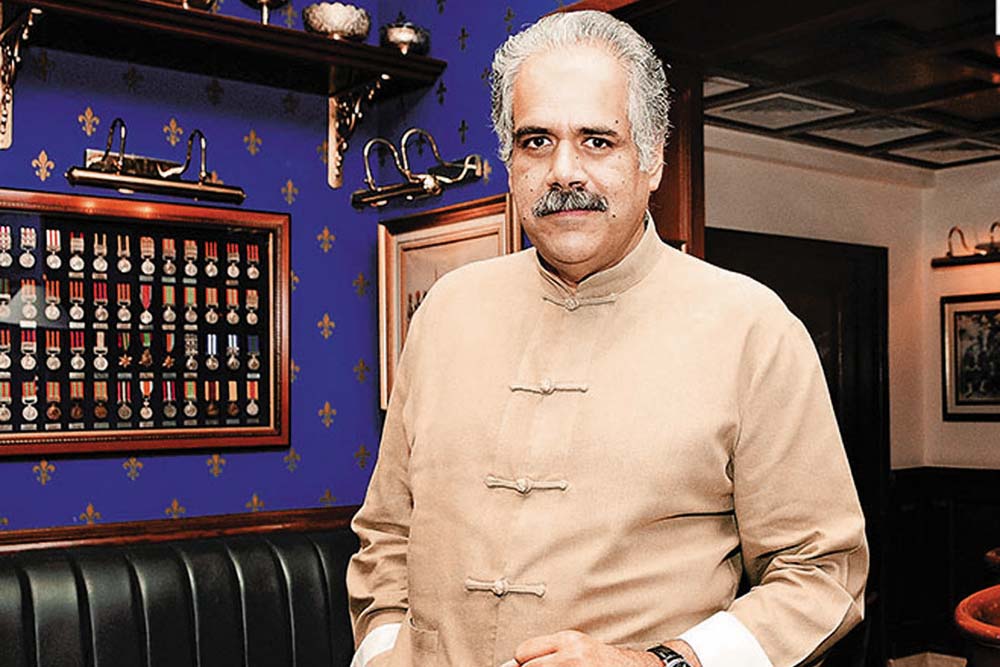 Any ranking or list is a tricky task. It can be based on objective data, but it still involves a certain bias. By default, some names have to be left out, especially if it is restricted to a certain number, 25 in this case. So, let us begin with what is missing from this list of new Indian business families and wealth creators in the past 25 years. Scions and members of the second and third generation are out. They built on existing wealth; they grew the respective empires. They did not start from scratch.

Similarly, businesspersons who had an elitist background, either in terms of wealth or power, were not considered. Ideally, Sunil Mittal of Bharti Enterprises should have sneaked his way in, but he didn’t. His father was an established politician, and the Mittal family made bicycle parts, imported gen-sets, and assembled push-button phones in the 1980s. Hence, when Sunil bagged a mobile licence, and launched the Delhi services in 1996, he was a known-unknown.

However, some names in this list did start before 1995, but their growth came subsequently. Lack of rains forced Chandubhai Virani’s father to ask his sons to leave their village in Jamnagar, Gujarat, in the 1970s. Armed with Rs 20,000, which was raised from the sale of land, their first small venture in fertilizers and farm implements flopped. The brothers began to sell refreshments outside a cinema hall in Rajkot. Until the late 1980s, they made the potato wafers at their residence. 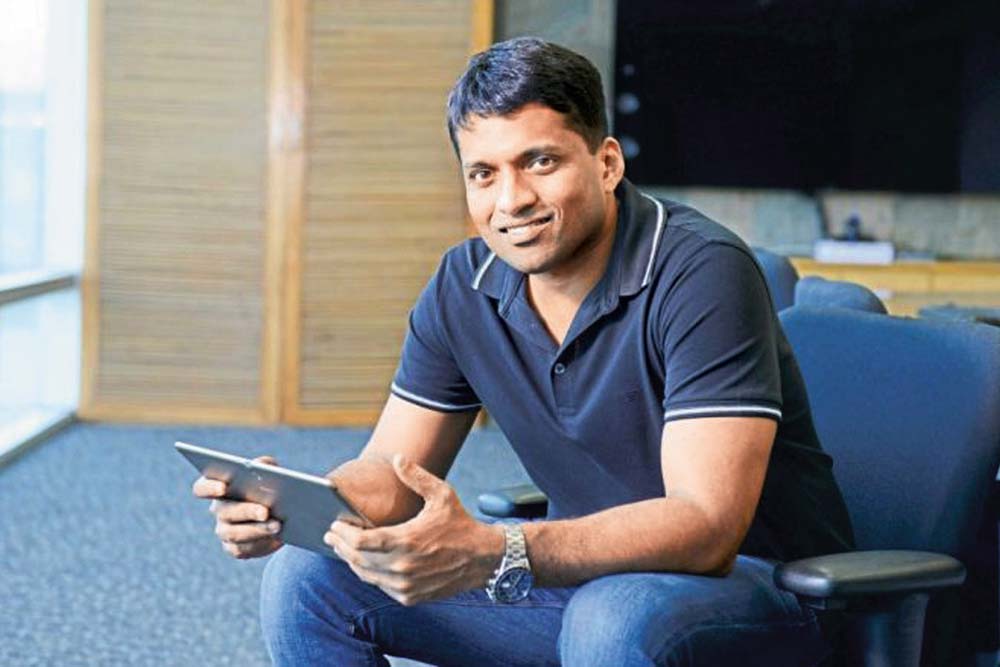 Although the first unit was set up in 1989, it was a small one. The real growth came in 1995-96, when Balaji Wafers, the family-owned company, set up a state-of-the-art and fully automatic plant with a capacity to make 250 kg of chips per hour. In a decade, they were the wafer kings of Gujarat. In 2008, their new plant could make 2,000 kg of chips in an hour. They are not billionaires yet, but with a net worth of $340 million, they compete with the topmost namkeen makers.

ALSO READ: Postcards From The Newsroom

The story of Sonalika Group’s Lachman Das Mittal is more incredible. During his professional life, he worked in LIC. Only at the age of 60, after his retirement, did he venture into the manufacture of tractors. This was in 1990, but his growth curve went upwards in the second half of the decade. Today, Sonalika is the country’s third-largest tractor-maker in terms of market share. The baton has passed on to Lachman’s sons and grandsons, but the old man attends office every day.

Lachman and Chandubhai, at 90 and 63, respectively, are the older people in this list. Most of the others are below 60; many are in their thirties and forties. We find more beginnings of new business families in the former category. The Bhatia brothers, Kapil and Rahul, along with their now estranged friend-and-partner, Rakesh Gangwal, amassed a wealth of more than $8 billion through IndiGo. They benefited from the opening up of the aviation sector in the early 1990s. 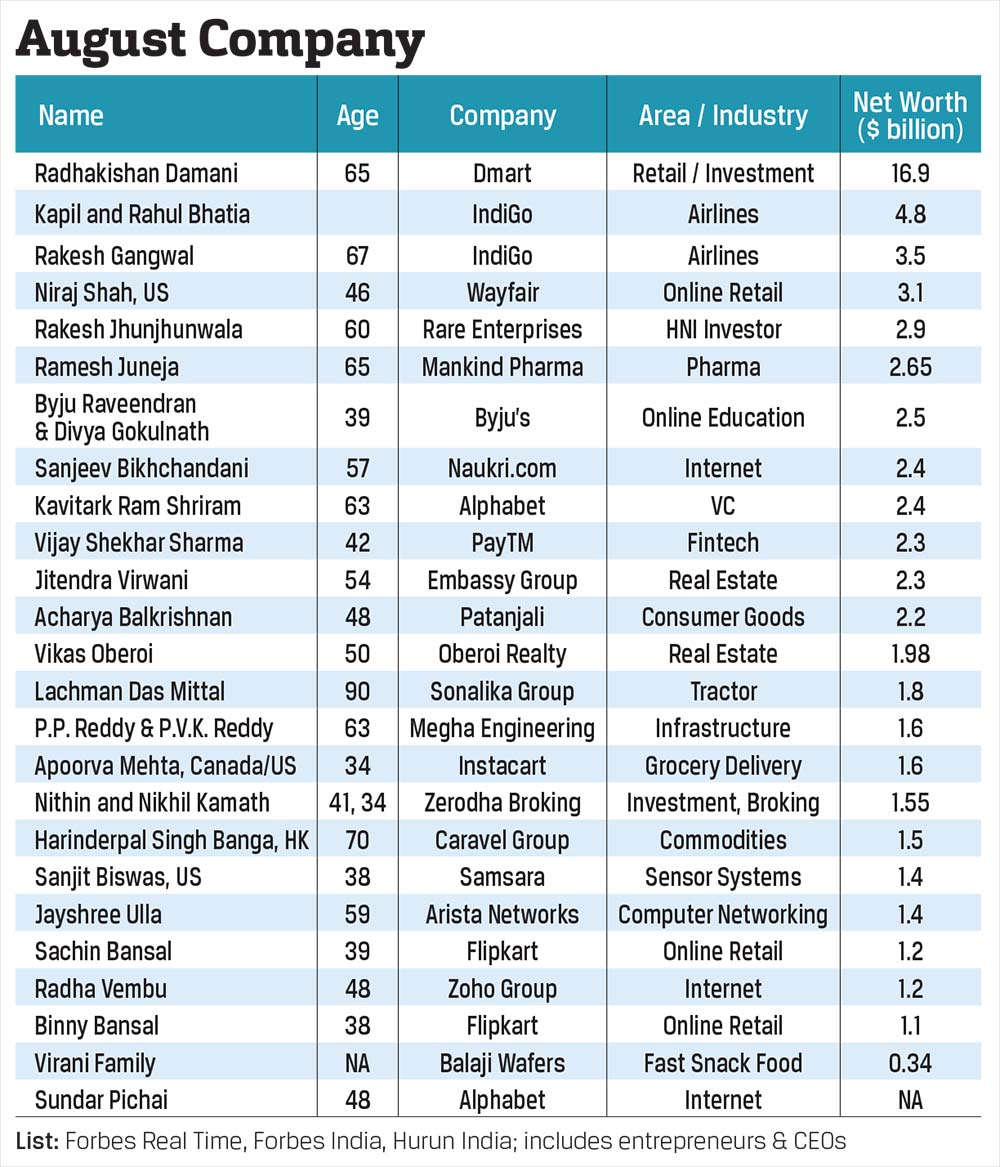 Uncle-nephew duo of the Reddy family were farmers who began by building small pipes for local municipalities. From the mid-1990s, they got into infrastructure – dams, highways, power plants, and natural gas distribution networks. Both P.P. Reddy and his nephew, P.V. Krishna Reddy, find themselves in the Forbes list of billionaires. The latter runs the family company, Megha Engineering. At present, the duo stands apart from south-based groups like GVK and GMR that faltered on the way.

Even among the younger crop, there are hints of family-run businesses. According to the Hurun List, the Kamath brothers, Nithin and Nikhil, are the richest Indians under 40 years. Although this is contradicted by the combined net worth of Byju Raveendaran and Divya Gokulnath, as per Forbes real-time ranking, there are no doubts that the two brothers revolutionised stock-trading in the country. Rightly or wrongly, they made millions into savvy investors, and part-speculators.

Nithin, who worked as a professional for Reliance Money, became a day-trader. Zerodha Broking, which started operations in 2010, allowed others to play stocks on a daily basis at margins of a few paise each. It has become both the lifestyle and life-saver of people across age-groups, who manage to earn anything between Rs 1,000 and Rs 5,000 a day. The Kamaths also wooed HNIs in their investment management firm, True Beacon, and are now incubators in several fintech firms. 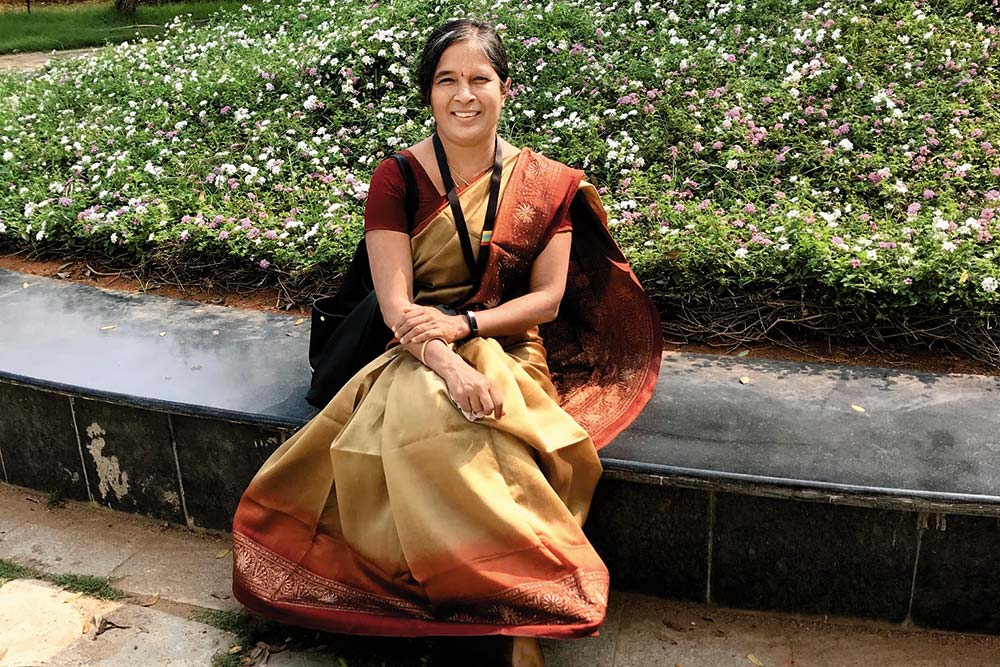 Of course, when it comes to wealth creation, we need to talk about entrepreneurs. But over the past two-three decades, professionals became filthy-rich, thanks to benefits like sweat equity and employees’ stock options. To capture these trends, we deliberately included a few in this list. Radha Vembu of Zoho Group is a mixed version. She works as a professional, but she is also the owner of the empire co-founded by her older brother. She maintains a low profile.

With a net worth of $1.4 billion, Jayshree Ullal, who was born in England, raised in India and works in the US, is one of America’s wealthiest women executives. Although she is President and CEO of Arista Networks, she owns 5 per cent of the stock, a part of which is willed to her two kids, and nephew and niece. According to Forbes, in 2018, “Arista settled a multi-year patent infringement battle with Cisco, Ullal’s former employee, agreeing to pay Cisco $400 million”.

Many executives use the capital they earn through high salaries to become venture capitalists. This was common among Indian-Americans in Silicon Valley since the 1990s. Born in India, Kavitark Ram Shriram moved to the US, and joined Netscape in 1994. He became a Vice President in Amazon, which he quit and invested in start-ups. He was among the early backers of Alphabet (Google). Although he sold that stock, he is still on the board of the parent company. 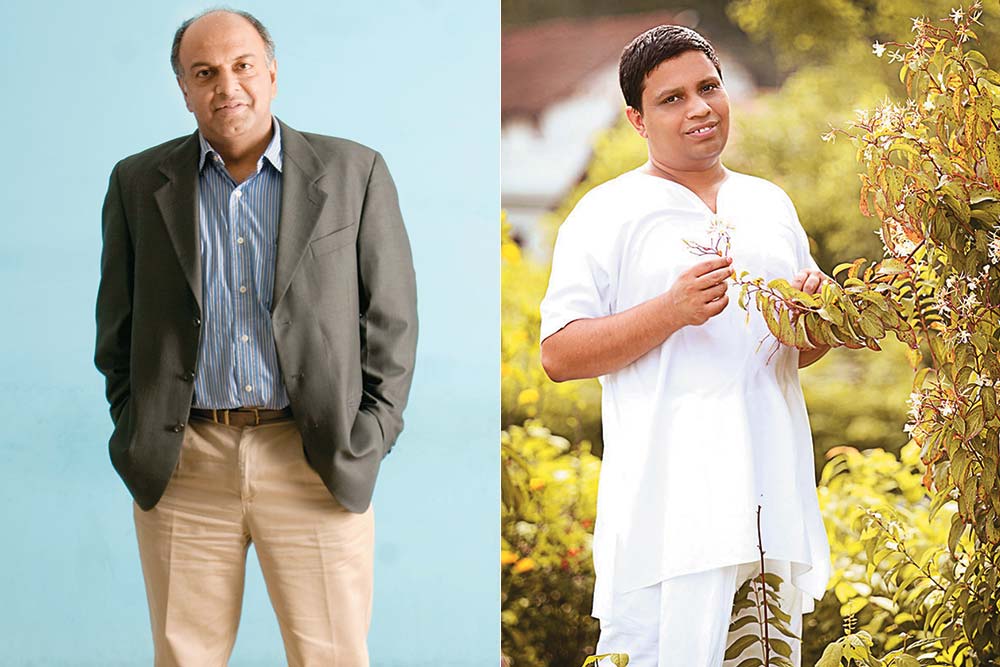 From the above examples, the sector-mix of the wealth creators is evident. Some belong to the traditional industries­—Ramesh Juneja in pharma, Acharya Balkrishna of Patanjali (consumer products), and Jitendra Virwani and Vikas Oberoi (no relation with the promoters of Oberoi Hotels) in real estate. Others took advantage of reforms, and got into the sunrise segments. The majority are in the technology space. The boom in the internet, and easy entry barriers helped them.

ALSO READ: In The Beginning, There Was The Spider

Silicon Valley’s Sanjit Biswas, a MIT graduate, is a typical serial digital entrepreneur. With his partner and college mate, John Bicket, he started Meraki, a cloud networking firm, and sold it to Cisco for $1.2 billion. In 2015, the duo launched Samsara, which offers cloud-based software to “collect and analyse data”. Their Indian counterpart, albeit older, is Sanjeev Bikhchandani of the naukri.com fame. He became a household name, like Hotmail’s Sabeer Bhatia, in the late 1990s.

Online retail and e-education emerged as the new gold-rush destinations in the past decade or so. Flipkart’s partners, Sachin Bansal and Binny Bansal, who are friends and not related, made it big, even as they go through a few challenges now. One has to re-introduce Byju Raveendran, who changed the way aspirants approached professional entrance exams. Then there is Vijay Shekhar Sharma of PayTM, who raked in millions in the years after the recent demonetisation. 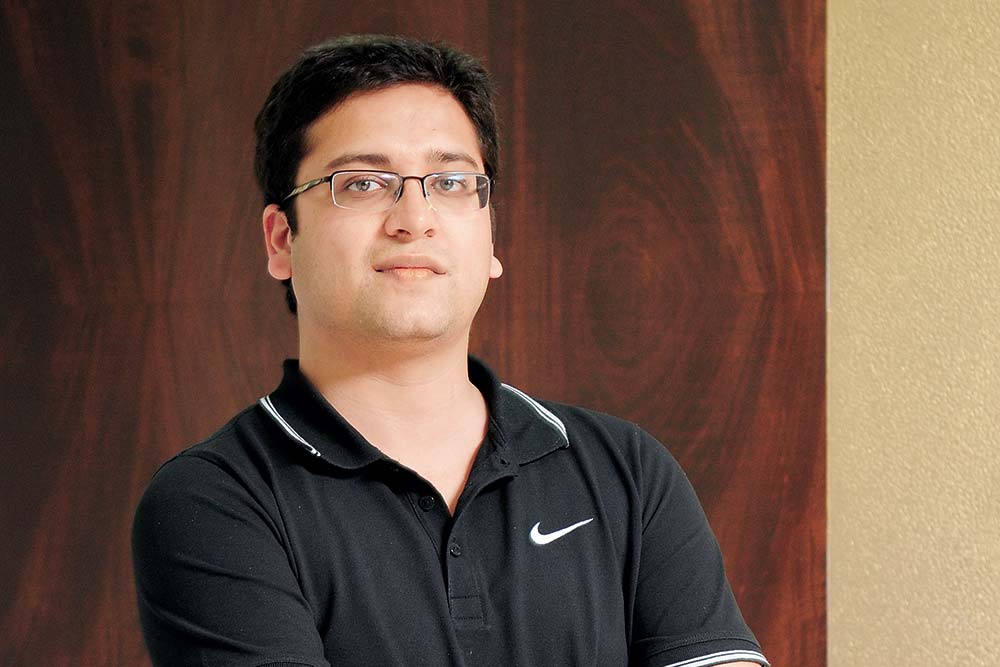 But this story will be incomplete without the mention of another set of wealth creators–the ones who generate capital out of thin air, or out of mere paper. These are obviously the stock and commodity traders, who churn millions of dollars every minute, hour, and day, and bet on how prices will move in the virtual world of valuations. Call them traders or gamblers. Remember that they are the ones who decide the net worth of every entrepreneur, which is based on stock valuations.

Rakesh Jhunjhunwala is possibly the most known investor. Called the Warren Buffet of India, his net worth is just under $3 billion. Stocks move up and down on rumours that Jhunjhunwala plans to buy or sell them. Not too far behind him is the Hong Kong-based Harinderpal Singh Banga, whose Caravel Group trades and ships commodities. His initial fortune came from a 21-year stint with Asia’s largest commodity trader, Noble Group. He completely cashed out of it in 2012.

As usual, there is a twist in the tale. Most people are unaware that Radhakishan Damani is the fourth richest India, after Mukesh Ambani, Gautam Adani, and Shiv Nadar. His wealth is more than the Hinduja Brothers, Lakshmi Niwas Mittal, and Anil Agarwal. Damani started as a stock broker, and became as powerful as the disgraced Harshad Mehta. However, he remained under the radar until the public issue of DMart, his physical retail chain. And his riches knew no bounds.