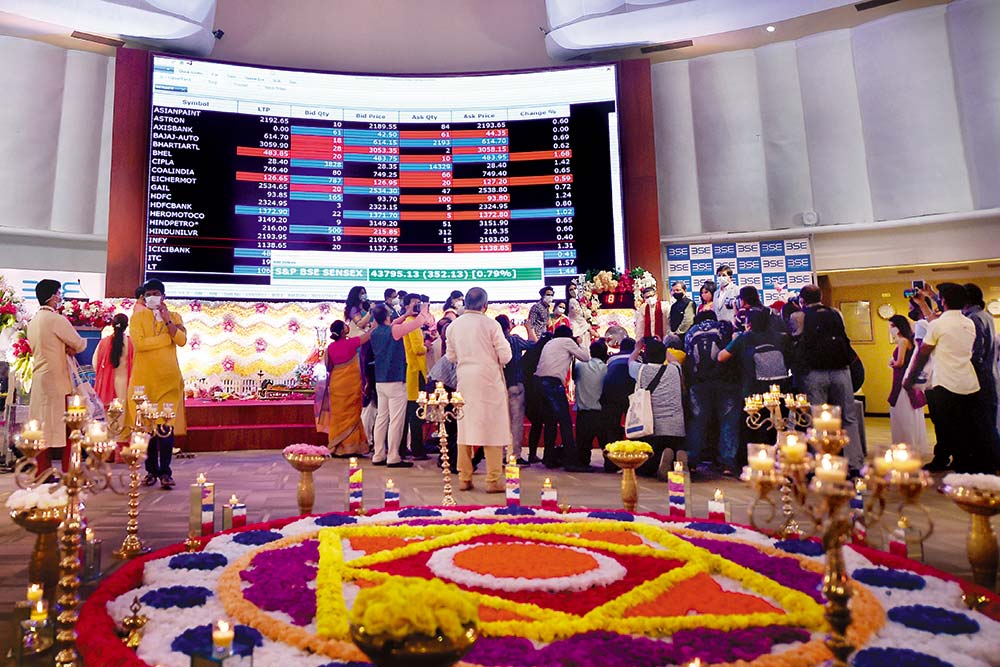 Sometimes, the size of the celebrations does not give much idea about the scale of the fireworks that would follow. On Diwali this year, the Bombay Stock Exchange’s (BSE) ‘muhurat’—a special one-hour trading session—was a tepid affair, with police allowing only 50 people inside the nerve-centre of India’s business. During normal times, the ‘muhurat’—which means auspicious—saw hundreds of brokers and their families, dressed in their festive best, congregate at the new ring inside the rotunda and perform the Chopda Puja, worship of their books of accounts. The token trading—brokers believe that gains made during this session brings year-round prosperity and wealth—was followed by bursting of firecrackers.

But the fireworks were set off alright—the bull took off in a frenzy, kicking and stomping India’s stock markets into life after months of lethargy brought by the Covid pandemic that has blighted the global economy. Since Diwali, the BSE index, Sensex, has continued its consistent, and unprecedented, northward march. As have the rest of the exchange’s 50-odd indices, which are related to specific sectors and stocks. Despite the viral uncertainty, the stock market rise has set the hearts of the Indian investors ablaze with optimism.

ALSO READ: From Steel To Stocks

Dalal Street, which became halaal street in March, had transformed into malamaal street by this festive season. Smitesh Satish Shah from Sangli in Maharashtra had shut down his business due to the pandemic. Now, he and his family is into stocks. Delhi-based Vartik U. lost his job, and shifted to day-trading. Pritesh Jain from Mumbai made killings from IPOs or shares.

Over the last eight months, the Indian index emerged as the best performer among its global peers. From its lowest mark in late-March, it catapulted by almost 70 per cent in early trade on November 23. In comparison, the US Dow Jones was up less than 60 per cent from its lowest point this year, Japanese Nikkei 55  per cent, and Britain FTSE less than 30 per cent. Only the US NASDAQ, which comprises tech stocks, zoomed by more than 70 per cent to outperform the Sensex. The Indian index bamboozled analysts, who had predicted a few months ago that it would be around 45,000 in 2021. Now, the talk is about 50,000 or even 60,000 by next year. Some contend that it can cross the first milestone by the New Year. Fingers are crossed, hands are on hearts, and minds are swirling with excitement. Investors wait with bated breath, even as they continue to search for the jackpot stocks.

ALSO READ: Side Bet Is An Unborn IPO

Amidst confidence, hope, and prayers, there is a sense that the party will continue in 2021. “We expect the uptrend to continue next year. The key will be sustainable economic recovery,” says Nischal Maheshwari, CEO (Institutional Equities), Centrum Broking. Apart from the Sensex, adds Gurav Garg, Head (Fundamental Research), Capital via Global Res­earch, other BSE indices “look promising” and have “enough potential to test their all-time highs”. 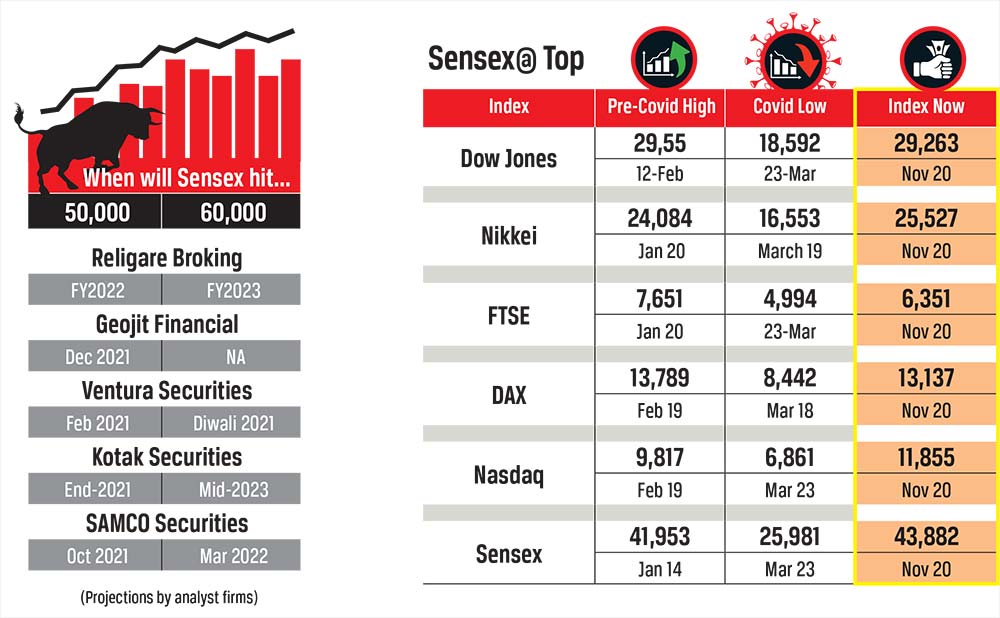 But, at the back of their minds lurks a fear, a palpable nervousness. Is this a case of rational expectations or irrational exuberance? Is this bullish run for real? As of now, the answer is blowing in the winds that bring ever-changing gusts on a daily basis. The reasons are obvious: India’s topsy-turvy growth indicators, the crazed and tensed political developments in the US, doubts over China’s immediate future, and the second viral wave in the western world.

This politico-health-economic mix can become either the catalyst for a sensational rally, or explosives for a sudden bust. This is more so because the boom, until now, was the result of an unexpected flow of money into stocks. This might sound a bit baffling as one assumed that the lockdown-related paralysis of most national economies had the opposite effect. Indeed, between February-April, money fled the stock markets, and sought safe haven in bullion.

However, around the same time, governments and central banks across the world pumped in trillions of dollars as stimulus packages to rejuvenate growth. A sizable portion of these amounts found its way into shares. When gold halted its upward movement a few months ago, stocks became the preferred destination, given the lack of action in real estate and several commodities.

Money gushed in from another pipeline, which is usually awash with cash. Globally, large pension and other institutional funds, which are cautious and risk-averse, yet flooded with capital, invest in safe government bonds. In a bid to re-stimulate economies, central banks slashed interest rates. Within no time, these funds saw their returns dwindle to peanuts as interest rates slumped to zero or negative.

In a recent article, Gita Gopinath, chief economist of the International Monetary Fund, explained that interest rates in 60 per cent of the world economies was below 1 per cent. In one-fifth of them, the figures were in the negative territory. Such a scenario forced the mighty funds to switch from loss-making bonds to possibly-profitable equities.

From across the Pacific, the news is that Joe Biden will be the new US President and many believe that that sanity will return to the White House. The 46th US head may ease trade and immigration laws through executive orders. He may manage to pass the new stimulus bill too. One needs to remember that Democrats still don’t control the policy-making Senate. 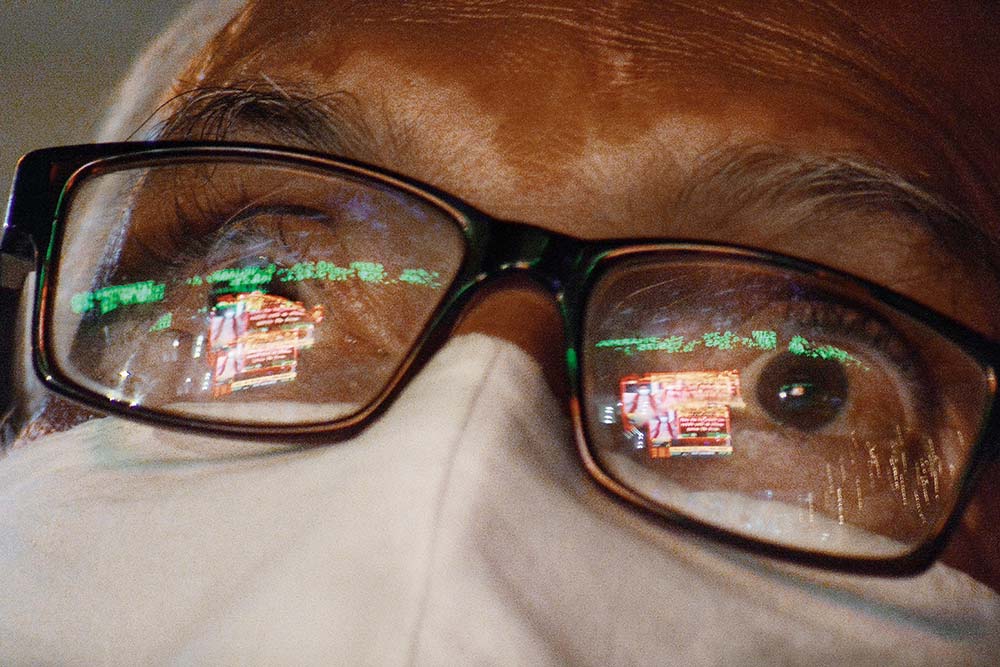 Photograph by Dinesh Parab
“Investors wait with bated breath....Amidst confidence, hope, and prayers, there is a sense that the party will continue in 2021.”

In a bizarre turn of events, if the Democrats lose the Senate, it will hinder the President’s flexibility, but can turn out to be a positive for stock markets. Biden’s bid to pass his ambitious $2 trillion green energy and infrastructure spending plan, and the urge to increase corporate taxes may take a backseat. These may stall the so-called socialist shockwaves that terrorise investors.

Viram Shah, CEO and co-founder of Vested Finance, explains, “The US scenario will not have any sector-specific impact on Indian stock markets. In fact, if the US passes the stimulus package, and the country’s Fed keeps interest rates low, there may be an increase in foreign inflows in Indian equities.” A few segments, like IT and pharmaceuticals may get a boost. For example, media reports indicate that the cap on H-1B visa for software workers may go up. Of course, Biden’s biggest worry is on the public health front. Recently, the daily new COVID-19 cases in the US crossed 1.8 lakhs, a worrisome figure. The President will need to immediately gear up for this challenge. The same is true for Europe, which finds itself in the midst of an intense second viral wave. Fresh lockdowns in England, France, and other nations will impede respective economic recoveries.

Now, let’s look eastwards. China continues to surprise experts. Initially, they felt that the Red Dragon would be the worst-hit because the virus emerged from Wuhan, a capital city of Hubei province. They were taken aback by Beijing’s bounce-back, even as the world turned comatose. Today, they contend that China may be the only large economy to witness a positive growth, around 2 per cent, in 2020.

What works in China’s favour is its pre-Covid decision to focus more on internal consumption. When exports dwindled, and a few foreign firms shifted manufacturing bases to delink from the Beijing-dominated global supply chain, the new policy was in place. In September, domestic retail sales were up by 3.3 per cent on a year-on-year basis. In the July-September quarter, China’s GDP grew by an impressive 4.9 per cent, although it was lower than the expected 5.3 per cent. In India, investors are excited about the Rs one lakh crore GST collections in October, which was 10 per cent more than the same month in 2019, and the highest since February this year. But Aditi Nayar, principal economist of rating agency ICRA, feels the rise was due to the build-up of inventories and purchases during the festive season.

The two critical ‘I’ of growth, industrial production and inflation, aren’t in comfortable zones. While auto production and power generation witnessed improvements in October, growth in coal and non-fuel exports slowed down. Luckily, the latter remained in the positive territory. Despite the government’s insistence on “green shoots of revival”, there are no tell-tale signs of an overall recovery.

Consumer inflation is to an alarming 7.6 per cent, pushed up by food and core inflation. It is expected to remain above 6 per cent till December. In October, prices of vegetables and other food items inched up despite an excellent Kharif harvest. Experts expect some relief due to fresh market supplies in the near future. Core inflation was affected by trends in clothing and footwear, housing, health, and recreation and amusement.

Over this quarter (October-December) and the next (January-March 2021), says economist Rajat Bose, GDP growth will be “volatile”. He feels that non-economic factors, like a possible second virus wave, and escalating conflicts with China and Pakistan, will play an important role. The ruling BJP will keep an eye on the forthcoming elections in West Bengal, and the other one on the borders, and still try to focus on growth. The green shoots may not ripen fast.

In fact, the most mysterious trends came from the Indian corporate sector, which boosted the Sensex. Of the 1,897 firms analysed by the Centre for Monitoring Indian Economy, almost 300 recorded their highest-ever quarterly profits. The profits of many of the remaining firms were the highest in the past 30 quarters. Profits soared even as sales dipped. This was because of the huge reductions in costs.

More importantly, business expectations improved. In its recent report, IHS Markit stated that companies foresee higher earnings in the next few quarters. India witnessed the largest change in profit outlook, as the nation’s “profits net balance” rose from a negative 3.3 per cent in June this year to a positive 9 per cent in October. Pollyanna De Lima, Economics Associate Director, IHS Markit, says, “Globally, India saw the greatest rebound in sentiment towards business activity.”

Such mindset is reflected in investment intentions, which went up in July-September. However, the figure is lower by 9 per cent compared to the same period in 2019. “The problem is with execution as many projects remain stranded,” feels Shashikant Hegde, director and CEO, Projects Today, which tracks private investments.

Clearly, the combination of global and local factors, in India and elsewhere, will decide the future fate of the stock markets. A few experts feel that the Indian index may be ready for a steep correction, which can result in a dip of about 2,000-3,000 points. Others contend that the overall movement will be upwards. The Sensex’ sizzle may continue, but it can also fizzle out in no time.