Home Is Where The Office Is 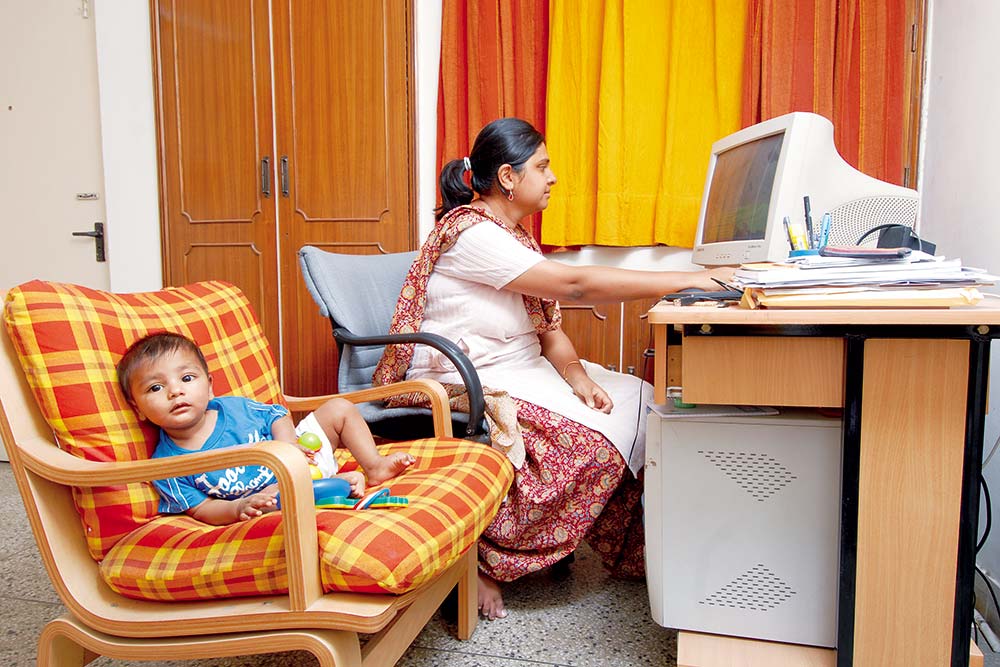 Prabhakar’s phone flashed a message: “Yes, you can.” His boss had just greenlighted his visit to the office complex on Chennai’s IT Highway. Prabhakar and two team members could now directly use the office system to run their checks on the latest project. “In the past, we used to message our bosses when we wanted a day off. These days, we seek their okay to attend office,” Prabhakar says, as he describes what COVID-19 has done to the work culture in software’s deadline-driven sector. He is not alone, as thousands of employees begin to trickle into the city’s IT campuses, and step out of their work-from-home cocoons.

The chartered buses and pickup cabs that picked up and dropped off the coders and project developers each day are a distant memory. Now, the occasional bus drops off the few who are drafted for office work. “Nearly 12,000 used to stream in every morning into our three complexes. Hardly 1,500 clock in these days. For those used to the bustle of a huge functional ­off­ice, being part of a small skeletal force was initially daunting,” recalls a Wipro employee.

Even for these office-goers the rules have changed. For example, apart from the Wipro employee’s team of 28, the office is empty. Gone are the fun and laughter that used to accompany lunch breaks. “We have time slots to visit the canteen for lunch breaks. Other teams have different slots. Chatter at the coffee machines is not possible since they were rem­oved,” he adds.

SICCI president R. Ganapathi, who also runs his IT company, has a word of caution. “Camaraderie, a ­driving point, has gone out the window. Some employees, who connected personally with their superiors, are at a loose end in the absence of such rapport. Unless HR remains strong, these iss­ues can blow up and affect performances.”

ALSO READ: A Job Of Work (From Home)

The IT workforce has now discovered the atm­osphere of open windows and pedestal fans.

The IT workforce, used to working out of air-conditioned glass-walled complexes, has discovered the atm­osphere of open wind­ows and pedestal fans. “The first few days were difficult, especially with the masks on,” recalls a TCS emp­loyee in Bangalore. Ganapathi predicts IT companies are now used to huge savings from rent, transport and in-house food stalls. They will quickly adopt a hybrid model to keep ­sensitive departments in the offices, and allow the rest to work from home. “This is true of companies involved in marketing and sales. FMCG major CalvinKare sold its Chennai headquarters, and asked employees to work from home,” says Ganapathi.

Management consultant Chandu Nair says that while most adapted to Zoom meetings, the downside was that internal communications has become more challenging due to remote workflows. This impacted the quality of output. Many employees at the middle and lower levels are at a loss because there is no supervision and oversight. “The time lag is another complaint. My CA complains that what he could complete earlier in an hour of personal appearance now takes twice that time because of the back and forth,” explains Nair. For managers, keeping the workforce grounded and disciplined is difficult as WFH creates a different work culture, especially in the Indian context as homes are smaller and families are larger.

A tax lawyer complains about the pitfalls in arguments through video calls. “I pointed out a certain technical point in support of my case, but what I said got lost in transmission. The appellate authority never took note of it, which affected my case. Earlier, we would just pull out the relevant document, and pass it on to the judge. I miss that.”

Soft skills suffered the most, feels Nair. In Zoom meetings, the attention span wanders and wanes. “In remote meetings, it is difficult to keep people aligned to a common purpose. The group energy dissipates. Teamwork and team spirit suffers due to lack of personal interactions,” he says.

More importantly, the new work style weakens the corporate bonding as every assi­gnment is transactional, says Nair. “Companies find it difficult to keep the corporate culture going. The pay cuts have not helped. If you find anyone working 14 hours, it is more out of fear of losing the job, and not out of loyalty or bonding.”