Anju Bobby George is our lone hope for Greece. Tell that to the sports authorities. Updates 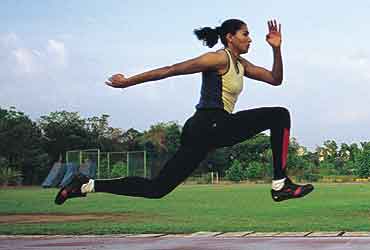 outlookindia.com
-0001-11-30T00:00:00+05:53
''I am not Anju, I'm Manju. My father dropped the 'M' so that I would be first in everything, even in the alphabetical order." If we didn't know her real name, that's nothing compared to the lack of official support Anju Bobby George, India's only world-class athlete, has faced.

Last year, the soft-spoken lady showed just how far you can come from remote Cheeranchira village in Kerala. That was when she became the only Indian ever to win a medal at the biennial athletics World Championship in Paris, when she uncorked a massive 6.7-m leap that got her the bronze in the women's long jump.

Now she is India's best hope for a medal at the Olympic Games in Athens in August. But as she trains at the Sports Authority of India (sai) facility on Bangalore's outskirts, with just her husband and coach Bobby George for company, one thing is clear. The level of support from the government hasn't changed much since her Cheeranchira days.

Anju is confident she will win at Athens, and in a season of loud electoral promises it is no hollow one. The French sports daily, L'Equipe,...