This is not a sting operation. It is a pre-poll ‘hit’ operation. Will these self-incriminatory revelations amount to court evidence? 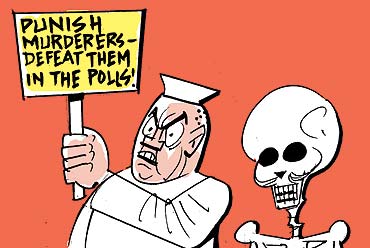 outlookindia.com
-0001-11-30T00:00:00+05:53
In India, right things are done for wrong reasons. The post-Godhra Gujarat riots occurred in March 2002. Media coverage, though commendable, was inadequate. Now, after five years, the media is exposing the genocide against Muslims that was unleashed by the government. One doesn’t want to carp, but why now? Because Gujarat is going to the polls?

On May 27, ’02, Bull’s Eye observed: "Riots overwhelmingly suggest they were pre-planned. Human Rights Watch of America released a well-documented 70-page report stating that riots were planned prior to the Godhra carnage. This view was reinforced by a reported briefing of K.P.S. Gill by Gujarat’s police officers. On the night of the Godhra incident, officials were told to go soft on Bajrang Dal and VHP activists. Narendra Modi insisted on transporting 17 bodies of Godhra victims to Ahmedabad for their last rites. Later, the riots started."