With Indian musicians fixated on remix mantras, from across the border come invaders riding a frothy surf 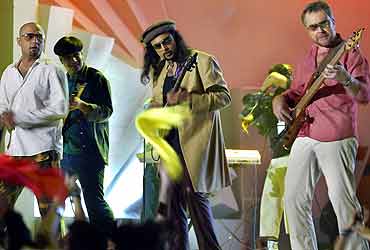 outlookindia.com
-0001-11-30T00:00:00+05:53
Black and white images of an ethereal Pakistani beauty, Zara Sheikh, light up our TV screens as she tries to do a Waheeda Rehman from Kaagaz Ke Phool, while her Gregory Peck-meets-Dev Anand co-star Shaan enacts a smitten Guru Dutt. All set to one of the most soothing tracks we’ve heard in ages, Khamaj, by Pakistani band Fuzon.

Compare this to Shefali Zariwalla’s suggestive gyrations in one of the two "latest remixes" of the old Guru Dutt classic ‘Kabhi aar, kabhi paar’. It doesn’t take a classical musician to figure out what’s happening: while Indipop is plumbing the dark recesses of remix land, good original music from across the border is not only filling the void, but also winning over millions of fans.

The occasional Pakistani artiste has always been appreciated in India, whether it was the late, great Nusrat Fateh Ali Khan or the Pakistani Carpenters, Nazia and Zoheb Hassan. Singers like Ghulam Ali, Mehdi Hassan, Farida Khanum and Abida Parveen have a fervent Indian following. But it wasn’t until the mid-’90s that popular bands...