Barring the Kurds, the rest of the Iraqis fighting with the coalition are not pleased with American arrogance 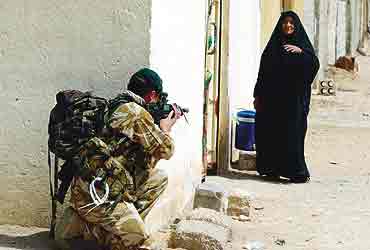 outlookindia.com
-0001-11-30T00:00:00+05:53
The abandoned commander’s office was stripped bare, just one page from the newspaper left on the dusty floor. It was the March 25 edition of Al-Qadsiyeh, the organ of Iraq’s defence ministry. "The Enemy Will Face Great Obstacles in Our Holy Iraq", blared the headline, in two-inch red type, above a picture of a beaming Saddam Hussein.

The paper was left behind when the men of infantry chemical unit No. 8 hastily retreated from this military base last week. While the US-led coalition has hit plenty of "obstacles" in south Iraq, Kurdish forces encountered no resistance when they took this territory. The jubilant peshmerga pushed all the way down to 3 km outside the city of Kirkuk where the retreating Iraqi forces had dug in.

All along the 500-km front between the Iraqi forces and the Kurdish autonomous zone, the Iraqis fell back last week, abandoning fox holes, Baath party offices and barracks decorated with murals exhorting the conscripts to "show good behaviour and make sacrifices for others". Kurds quickly occupied the territory—and small groups of US...