The Opposition is gunning for Advani's head, it wants him tried for conspiracy in the demolition case Updates 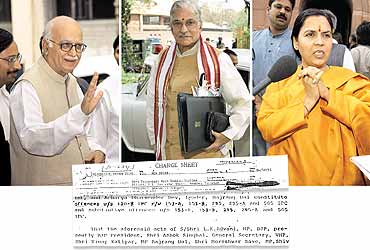 The Ayodhya case has come up for discussion, debate and motion 45 times in Parliament, ever since the demolition of the Babri Masjid at the disputed site on December 6, 1992. Last week, the issue was raised amid uproar, for the 46th time , on the opening day of the monsoon session and, according to indications, this time it may prove to be more complex than before: it threatens to put, among others, the prized scalp of deputy prime minister L.K. Advani directly in the line of fire.

Even as a battle, centring on the fate of two senior cabinet ministers, is being fought by legal eagles and politicians, the combined Opposition maintains that the charges under 120-B against Advani, Union hrd minister, Murli Manohar Joshi and Madhya Pradesh chief ministerial hopeful Uma Bharti and others had...