Toned bodies, flat abs are in. So are personal trainers. 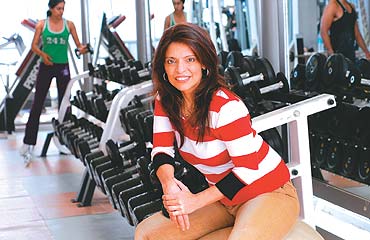 outlookindia.com
-0001-11-30T00:00:00+05:53
There was a time when Bollywood heroines shimmied their thunder thighs with unabashed glee; and heroes with rosperous midriffs played, rather unconvincingly, the roles of college Romeos. And because cinema's greatest icons could get away with being more fat than fit, we got away with it, too.

Not any more, though. Now Esha Deol builds her entire career on her buff avatar in Dhoom; Shahrukh Khan defends his 'Bollywood King' title from younger challengers by looking more toned than ever before; hell, even a voluptuous Bipasha Basu sheds her femme fatale image, along with those extra pounds. These days, it's all about lats, quads, glutes and pecs—and a hip new set of personal trainers who can make you look like a million bucks. People like Prashant Sawant, the man behind srk's six-pack abs, or Satyajit Chaurasia, who helps Hrithik Roshan maintain his sinuous allure.