Blimps On The Radar

Zeppelins are making a comeback, as alternative air transport 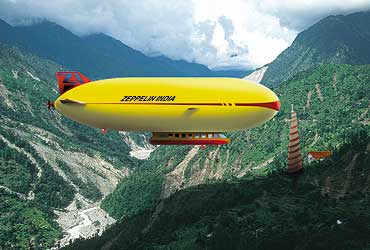 outlookindia.com
-0001-11-30T00:00:00+05:53
Zeppelins, creatures of aviation's Jurassic era, nosedived into oblivion in 1937 when the mammoth 804-foot long Hindenburg blew up at the New Jersey landing field, killing 36 of the 92 passengers. Though largely consigned to aviation museums, a few abridged versions called blimps can still be sighted in the skies over the US, carrying not people or goods but billboards.

Quixotic as it might seem in the age of Concordes and Boeings, some scientists are now trying to resurrect the dodos and give them their long-lost place in the skies. Mandarins in the science and technology ministry are also believers. They are now seriously hoping to revive it as a means of transport in India, especially in the relatively inaccessible Himalayan regions.

The project is sponsored by the ministry's Technology Information Forecasting and Assessment Council (tifac). Y.S. Rajan, executive director, tifac, and chief instigator of the enterprise, says modern airships—or zeppelins, dirigibles or blimps, as they are variously called—would be assuredly safer than their ancestors if we...