It seems a nice deal, a chance to interact with the sole superpower's representative. But it doesn't quite work that way. 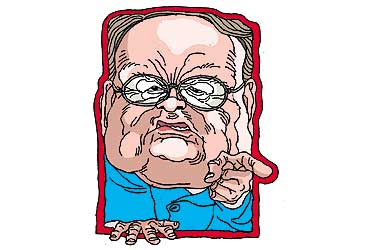 outlookindia.com
-0001-11-30T00:00:00+05:53
Does the wisecrack that an ambassador is a person paid to lie for his country abroad still hold good? Certainly, the job description does not fit the honourable Robert D. Blackwill, although US ambassador-watchers confirm New Delhi has not seen many like him before. He brings to his office a far-right Republican worldview combined with an inexhaustible store of energy and a capacity for prickliness akin to that of Sir Vidia Naipaul.

Soon after his arrival at Roosevelt House, Blackwill constituted the "round table". To this table are invited some of the most eminent Indian minds for an elaborate (but not extravagant) meal with the ambassador during which "serious issues" can be discussed, analysed and examined. Blackwill confesses he detests cocktail parties precisely because they preclude meaningful dialogue. Social chit-chat, he says, bores him. He admits he lifted the round table concept from the late Katherine Graham, The Washington Post publisher, whose dining table has gone into legend as a place for the best and brightest Americans to meet and talk...