India's new minister for external affairs brushes aside those who see him as a relic from the Cold War era. As for being a hawk--or a dove--he says we're running a foreign policy, not a bird sanctuary. 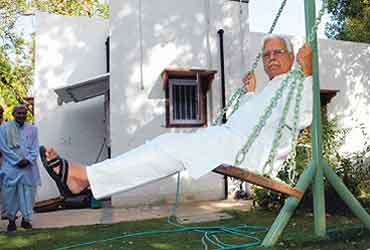 Two days before Indira Gandhi was assassinated, K. Natwar Singh went to her to discuss his political plans after taking premature retirement from the Indian Foreign Service. He told Mrs Gandhi that his first task would be to acquire a new wardrobe—khadi kurta-pyjama, Nehru jacket, the Congress livery. Mrs Gandhi responded, "Now that you are coming into politics, a thicker skin would be more useful." Natwar Singh seems to have taken her advice seriously. On his second day as India’s new minister for external affairs, he met V. Sudarshan at his residence in Teenmurti Lane and brushed aside those who see him as a relic from the Cold War era. Interview over, he sat on the swing for a photo session to show that he is still young at heart.

Are there any aspects of the BJP's foreign policy that you found disturbing?

First of all, their ministers didn't know the difference between diplomacy and foreign policy. Foreign policy is what you do; diplomacy is how you do it. The handling of Pakistan was very erratic. In five years Mr Vajpayee made...