As Random House and Harper battle over Yuvi, a gawky Vikram Seth stars in the Absolut vodka ad.

Earlier this year, Random House pulled off a coup of sorts when it signed up Yuvraj Singh to tell the story of his fight against cancer in a book titled In Different Form that will be out in a few weeks. Now, veteran sports journalist Makarand Waingankar’s book on the cricketer, Yuvi, published by Harper, was launched last week. Yuvraj was there, so were Dilip Vengsarkar and Kapil Dev. Apart from Yuvi’s cricketing talent, the book also talks about his fight against cancer. Now, will this impact the sale of Yuvi’s own book, or raise curiosity about it? Random House will be hoping it’s the latter. 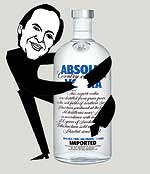