Batman has been all about darkness, Nolan just makes it a shade darker. Go see it. 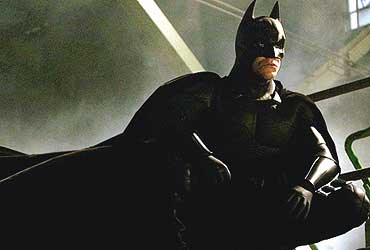 There's always been something interesting and attractive about Batman, something deep, brooding and human that has never been so easy to spot in his other superhero compatriots. Only for a Batman could Seal have composed a song like Kiss from a Rose. Now, give such a melancholic comic-book character to an intensely creative filmmaker like Christopher Nolan (Memento, Insomnia) and you get a wonderfully moody and introspective film. What one can safely declare is that Batman Begins is more for the men than the boys.

So, there's less of action, SFX, thrills and chills. And there aren't any colourful villains like the Joker, the Catwoman or the Penguin. What you get instead are some wise evil men like Ducard aka Ra's Al Ghul (Neeson) who want Batman to join the League of Shadows and the sinister and creepy psychologist Scarecrow, who is terribly scary yes, but colourful, no....