Fernandes' only hope: CBI muffing it up 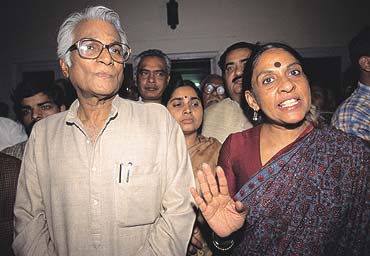 outlookindia.com
-0001-11-30T00:00:00+05:53
If the CBI charge of kickbacks in the Barak missile deal are true, then former defence minister George Fernandes, president of the now-defunct Samata Party, Jaya Jaitly, and ex-navy chief Sushil Kumar could be indicted for accepting commissions from the Israeli manufacturers. After countrywide raids in 35 places including arms dealer Suresh Nanda's offices in Delhi and Mumbai, the investigating agency claimed clinching evidence in its FIR last week to prove that Rs 2 crore was paid to Fernandes and associate Jaitly.