In death, he has risen. And in the local orbits being scripted, the role of the police has been blacked out. Updates 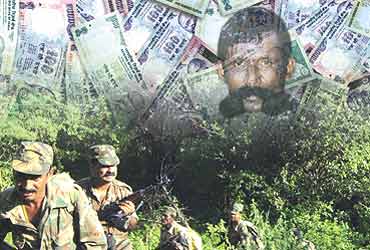 outlookindia.com
-0001-11-30T00:00:00+05:53
Koose Munisamy Veerappan lived many lives—a sandalwood smuggler, elephant poacher, ruthless killer, hero of the tribal poor, kidnapper of the rich and famous. In the end, he even tried playing Tamil ideologue. In death, too, he has been dying many deaths since he was killed less than two weeks ago in Paparapatti village of Dharmapuri, Tamil Nadu.

The lore abounds about his death and the myth-making has begun. Popular imagination is running wild. Villagers in Salem, Kolathur, Dharmapuri, Mettur and his hometown Gopinatham refuse to believe that their hero, and sometimes even god, so naively played into the hands of the STF. There is talk of building a temple in Veerappan's memory and many are in fact stopping by his grave in Moolakadu. One report said, "Some come to shed a tear and others come to collect sand from the vicinity of the grave."

One may dismiss this as indulgence of the illiterate rural folk, but what about the antics of the pragmatic STF chief, K. Vijayakumar? He wasted no time in getting his head tonsured and going on a padayatra from Bannari Amman...