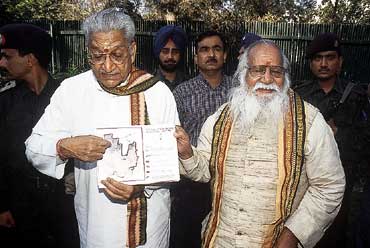 There are four title suits pending before the Lucknow bench of the Allahabad High Court over the disputed land at Ayodhya. The legal battle over the 80 feet by 40 feet land far predates the VHP movement to construct the Ram temple.

The first case filed in January 1885 by Mahant Raghubir Das seeking permission to construct a temple on the chabutara outside the Babri Masjid was dismissed. The mandir-masjid issue then remained in suspended animation until the night of December 22, 1949, when trespassers broke into the Babri Masjid and installed an idol of Ram. Subsequently, the city magistrate attached the premises.

In the next 12 years, four title suits followed—all still pending before the courts. These include the one filed in December 1950 by Mahant Ramchandra Das Paramhans who is now the chairman of the Ram Janmabhoomi Nyas and another by the Sunni Central Boards of Waqfs, UP, in December 1961. All the four suits were clubbed together and brought before the Allahabad High Court which began recording oral evidence in July 1996.

The case has always...