Sants At Ayodhya Want An Ordinance, But It Won't Be Simple

Bringing in legislation to build a temple on the disputed site may not be simple. It’s been tried before. 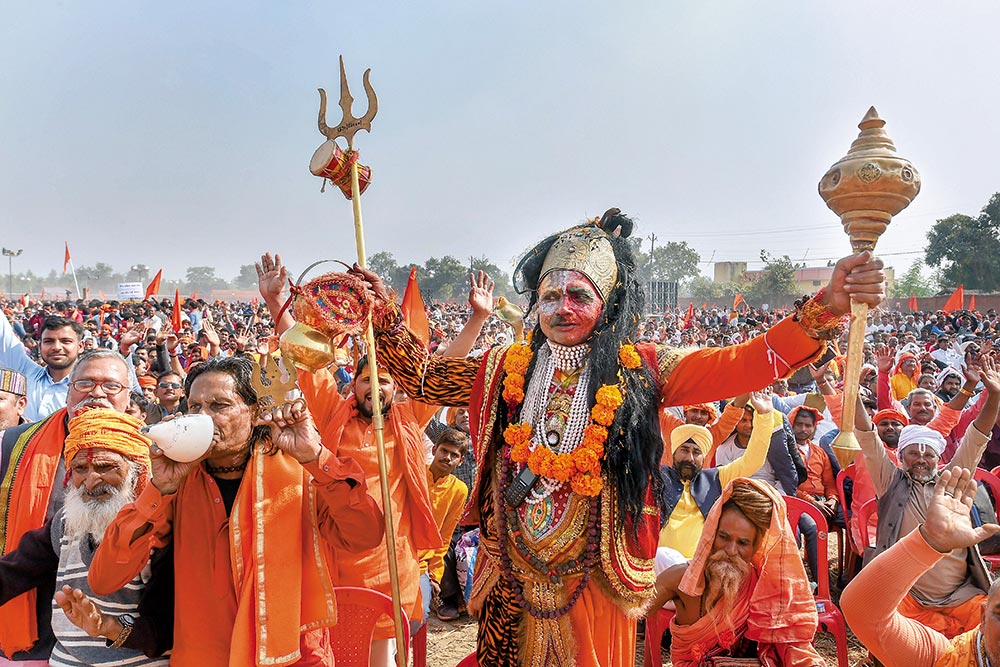 Ramming IT In
The VHP dharam sabha in Ayodhya, November 25
Photograph by PTI
Salik Ahmad, Ushinor Majumdar November 29, 2018 00:00 IST Sants At Ayodhya Want An Ordinance, But It Won't Be Simple

It was a VHP dharam sabha that, in early 2013, made the first formal demand that Narendra Modi be made the PM candidate—so the words spoken there are no fringe theatre. Now, a new demand is rising from the congregation of sants at Ayodhya. At Kar Sevak Puram, hundreds of stone slabs, some carved already, await their day of fulfilment. Some have quaint messages left on them by visitors: “Ruchi ♥ Santosh”, “Love you Shri Ram, Gudlani Parivar, Jaipur”. Rajnikant Bharat Rai, a craftsman from Gujarat, says engraving a slab takes 8–10 months. “There’s no dearth of craftsmen. All that’s needed is the order,” says Rai, adding that visitors often touch his feet in reverence. Is such an order in the offing? “We have Modi and we have Yogi. If not now, then when?” asks Nritya Gopal Das, head of Ram Janmabhoomi Nyas. And the courts? Pawan Gupta, a shopkeeper in Ayodhya, too says the government should bring in an ordinance or legislation.

But bringing in legislation to build a temple on the disputed site may...