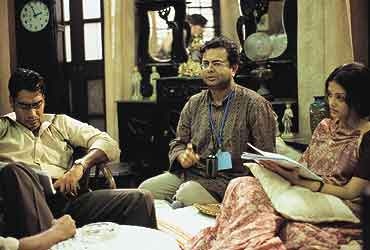 outlookindia.com
-0001-11-30T00:00:00+05:53
'I think you're getting too intense, Ajay...just look at her naturally for a while; take it easy, then move...," calls out Rituparno Ghosh to Ajay Devgan, the hero of Raincoat. It's Rituparno's first big-budget venture. And for those who like to see him as Satyajit Ray's heir apparent in Bangla filmdom, here is proof of a carryover of the master's partially requited desire: like Shatranj ke Khiladi, the film is in Hindi.

If all goes according to script, Raincoat will consummate Rituparno's attempt to be the crossover man—a journey he initiated with his 2003 Aishwarya-starrer Chokher Bali. The one-time ad filmmaker had started his career in features with small-budget—if critically appreciated, widely discussed and massively popular—Bengali films. It was in a long time that blood had actually stirred in the arteries of an anaemic Tollygunge. For years, this decay-struck hub of Bengali film studios had been living on a string of tacky Bangladeshi co-productions—on the dismal Beder Mey Jyotsana (Snake-charmer's Daughter) prototype....