"As A Coach, I'll Always Back Ganguly"

The Indian coach backs his boys for the World Cup 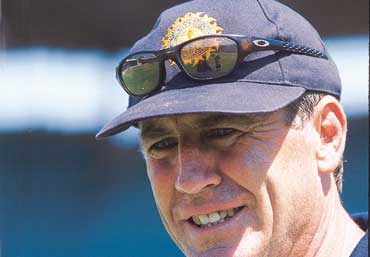 outlookindia.com
-0001-11-30T00:00:00+05:53
Would you admit that this is the worst moment of your coaching career?
It's been embarrassing, surely. And it has not helped that it's happened in the country I played my cricket in. But I do feel strongly about the pitches we've played upon on this tour.

The batting has been awful.
I believe our batting line-up is the most attractive—certainly the most entertaining—in the world. They were kind of set up on these pitches. It's sad in a way that New Zealand fans haven't been able to soak in the skills of the Tendulkars and Dravids.

Indians can't complain about the pitch in Napier. Even our fielding was pathetic.
It was unacceptable. But I am prepared to let that one go as a one-off thing. We have raised our fielding standards in the past one year and we can overlook a bad day or two in the field.

Do you back your captain Ganguly?
As a coach I would always back him. He will be fine. Being the captain of India is a tough job and we're all under pressure. We haven't had a run like this before. It's difficult for a...