Heart in the right place, but it fails to move. And the blatant plugs for Nerolac and Twinnings feel horribly wrong. 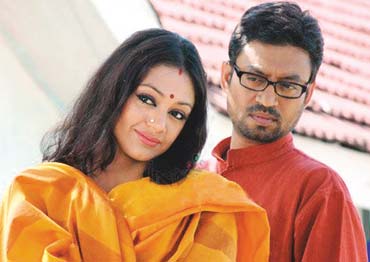 Apna Asmaan has its heart in the right place, yet it fails to move. It’s to do with the film’s odd mix of reality, metaphor and medical mumbo-jumbo. Just as you begin connecting with the slow learner Budhi (Dhruv) and his parents (witty and loveable Irrfan and graceful Shobhana) the narrative jerkily turns into a medical fantasy.

Budhi becomes a math genius with a ‘neuron-recharging’ injection called Brain Booster. As he morphs into a violent Frankenstein, the Budhia (remember the 6-year-old marathon runner?) metaphor emerges: every child has its own destiny and parents shouldn’t get ambitious for them. The narrative is tedious, the audience fails to empathise with the characters. Only Irrfan delivers; he is like the spine that makes the film stand. My pet peeve: in-film...