An Ode To Myself

So he is no critic, but wish the object of Tharoor's admiration was someone else, not him 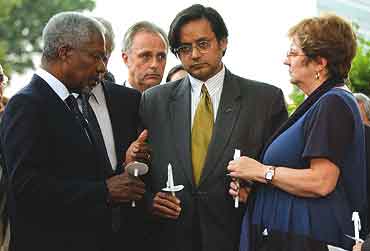 Technically Shashi Tharoor’s collection of occasional pieces is a book. It has a spine and hard covers with 236 nicely printed pages in between. But is it ‘a book’? The truth is, it’s one of those ghastly things, ‘a made book’: the product of an unholy union between a publisher keen to beef up the frontlist and an author eager to squeeze more mileage out of his backlist.

The opening scene is of amar chhota Shashi at home in ’60s Bombay, devouring the works of Blyton and Richmal Crompton, Tintin and Tenali Raman. Even when tackling ‘adult’ writers, his tone is that of a book enthusiast rather than a literary critic—all very well for the newspapers and magazines for which these articles were intended; not so great for a book.

Four of the six essays in his first section (Inspirations) are about his own books: The Great Indian Novel, Show Business, Riot and a eulogy to Kerala (with M.F. Husain), God’s Own...