His forthcoming film Paheli is based on Duvidha, a Rajasthani novel by Vijaydan Detha, and produced by Shahrukh Khan’s Red Chillies Entertainment. 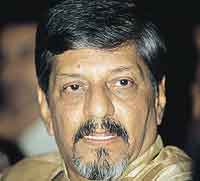 What's the story about?
A woman's right to choose—a recurring theme in my films.

How different is Paheli from a 1973 Mani Kaul film on the same story?
As distinctly different as Mani Kaul is from Amol Palekar.

You've cast Amitabh, Shahrukh, Rani, Juhi. Do you now believe in star power?
I've never been averse to working with stars when the story demands. Every subject chooses its idiom, texture, cinematic language.

Is casting stars meant to gain audiences?
That helps, but one doesn't need to make senseless films for that alone.

Was it easy working with the stars?
How else could I have shot it in 45-days flat?

How did you rope in Shahrukh?
When I approached Shahrukh with the role, he was so fascinated by Sandhya Gokhale's script that he also offered to produce the...