"Amma And Her Coalition Will Be Routed"

MDMK chief, better known as Vaiko who spent 576 days in jail under POTA, tells S. Anand why he hasn't joined the poll fray. 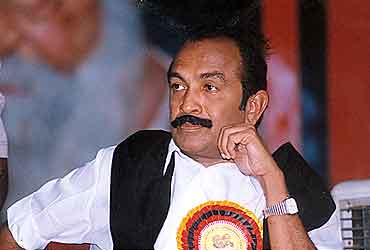 outlookindia.com
-0001-11-30T00:00:00+05:53
Why are you not contesting in this election?
I want to devote my time, energy and resources only to Tamil Nadu and my party. As an MP I end up spending close to seven months in Delhi. I have only weekends for my state. I have served 24 years, and now let others get a chance.

Is this a permanent decision?
In politics, nothing is permanent. It doesn’t mean I’m going to change the decision. I certainly won’t contest these Lok Sabha or assembly elections.

What will be your main campaign slogan, besides pota?
pota is not the main issue, it is one of the issues. We will demand the scrapping of pota.

In Tamil Nadu, hasn’t it become Amma vs the rest?
Not really. But if such were the case, Amma and her coalition will be routed. She may try to project Vajpayee in the last few weeks of campaigning and may win a few seats.

Isn’t it ironical that Jayalalitha should be projecting Vajpayee while you were with him all along?
When Vajpayee campaigns against his former allies, he will lose his credibility....