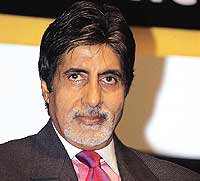 What's the Reid & Taylor campaign going to be like?
I'll soon be sitting with the creative team to design the promotion.

Like Pierce Brosnan, are you doing a James Bond in Boom?
Boom is not an espionage film. It's a tongue-in-cheek satire, very sophisticatedly funny. Kaizad is full of beans, quite crazy in his vision.

We've never seen you surrounded by so many oomphy models before.
At my age, I am prepared to try out any role. Surely, the women in the film were very attractive.

How is Sanjay Bhansali's Black shaping up?
That is one project I am most excited about. We start shooting some time in December.

Your film with Rituparno Ghosh is delayed.
It's been shifted by a few months. He was OK with that as long as he could make another film in the interim.

There are rumours that you didn't like Rituparno's script.
Where's the question...