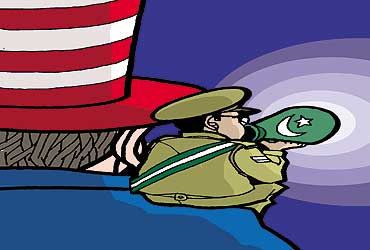 outlookindia.com
-0001-11-30T00:00:00+05:53
Son, in politics you've got to learn that overnight, chicken shit can turn to chicken salad." This was Lyndon B. Johnson in '58, answering a reporter's query on his turnabout when Johnson embraced Richard Nixon, who he'd earlier called "chicken shit". Today, we can safely say President Musharraf is America's chicken salad. And, it's happened not only due to America's own self-interest but because, most discomfortingly, Musharraf is winning the war against India.

Musharraf has instinctively understood that in today's war, more than anything else, as Marshall McLuhan said in 1971, "Politics will eventually be replaced by imagery. The politician will be only too happy to abdicate in favour of his image, because the image will be more powerful than he could ever be." Beginning with the Agra summit, when Musharraf hijacked India's senior editors into a "private" breakfast which he later had broadcast, he has waged an unrelenting war to build his image. He doesn't deserve to be called shrewd or super-intelligent. It is the most obvious thing anyone with below average IQ would...