The orthodoxy concedes that triple talaq is an ill, but still fights shy of tackling it Updates 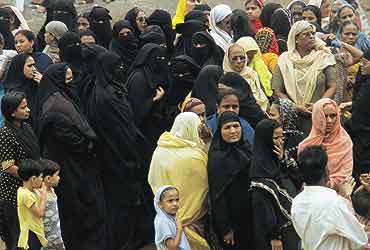 outlookindia.com
-0001-11-30T00:00:00+05:53
Status: For the first time ever, the All India Muslim Personal Law Board, after meeting in Kanpur last week, declared that the practice of triple talaq is a "social ill".

Status Quo: The board made it clear that there can be no ban on the practice of triple talaq.

So, is the All India Muslim Personal Law Board changing its attitude towards the deplorable practice of triple talaq or not? Here's what happened, or didn't happen. Triple talaq (Muslim men utter 'talaq' three times in a single instance to summarily annul their marriages) was not on the board's discussion agenda for its working committee meeting on July 4. But some members, reportedly, did "express concern" over the issue during the meeting. This, "with the committee categorically refusing to discuss triple talaq officially". When prodded by the media after the meeting, the board's general-secretary, Syed Nizamuddin, made this statement: "We cannot ban the practice of triple talaq, but we can discourage it."