What's your male poison? A critical look at our heroes down the ages. 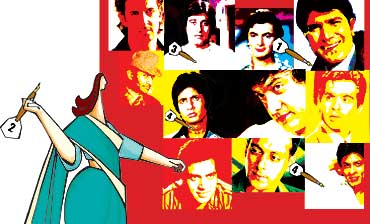 outlookindia.com
-0001-11-30T00:00:00+05:53
It's not easy being a woman and a Hindi movie fan. We womenfolk haven't been served too well by our predominantly male filmmakers. Often, we have been landed with some truly execrable specimens passing themselves off as romantic leads. In some other cases, we have been pleasantly shocked to be treated as adults. Let's cast a female gaze on some of the leading men of Hindi cinema down the ages and rate them on a scale of one to five.

Dilip Kumar
He often played the loser lover, but there's something quite delectable about watching Dilip Kumar drown. Perhaps it had to do with the smile in his eyes and the softness of his voice. Unlike Raj Kapoor, he wasn't an alpha male. Unlike Dev Anand, he wasn't an overgrown adolescent. Dilip Kumar was distant, thoughtful, tormented even, and fully romantic in a heart-tuggingly old-fashioned way. Watch Madhumati or Jogan again if you don't believe me.