A much talked about film imagines a society sans women 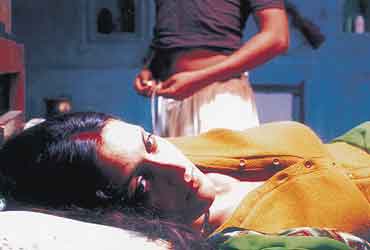 outlookindia.com
-0001-11-30T00:00:00+05:53
Without women, men are not human. This metamorphosis of the male into animal if the world were to become womanless is the theme of Matrubhoomi: A Nation Without Women. Perhaps the first full-length feature film on female infanticide, Matrubhoomi is noteworthy, not just because it is imaginative, but because it is less imagined, and more real, than it seems. Over 35 million girls have gone missing in our country in the last decade; killed while still foetuses, executed soon after they were born, murdered because of sheer neglect.

Writer-director Manish Jha (whose A Very Very Silent Film, won the best short film award at Cannes in 2002), extrapolates from our current reality to imagine an Indian village where, due to routine killing of female newborns, women have entirely been wiped out. The frustrations, fury, fanaticism that follow in this gender-skewed village have moved several international juries; Matrubhoomi has received awards at Venice, Kozlin, Thessaloniki and Florence. It hits Indian screens on March 26.

In Jha's village without...