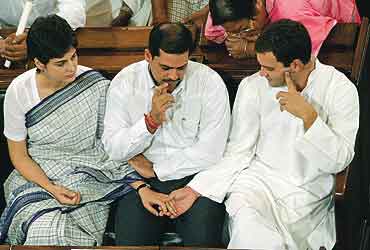 Family sources say it may have been one factor. But more than that, neither Rahul, Priyanka nor Sonia herself wanted the BJP to use her "foreign origins" to destabilise the government. Says a Sonia aide: "The family didn't want strife across the country on the foreigner issue. It was evident the BJP and the Sangh parivar would not have confined the battle against Sonia to Parliament alone. They would have taken it to the streets."

Sonia herself told Left leaders this before announcing her decision."I don't want to be the cause of a divisive agenda. I want this government to function smoothly for five years."

So the security threat could at best have been a minor consideration. Says a close aide to Priyanka: "The way both Rahul and Priyanka mingled freely with the crowds and Sonia reached out to people at her roadshows through the campaign, I don't believe they would cite that to ask her to withdraw her name." Rahul himself denied it: "Hum to security threat...