The Bangladesh high commissioner rubbishes the charges of the regime change in Bangladesh helping ISI and Al-Qaeda. More Coverage 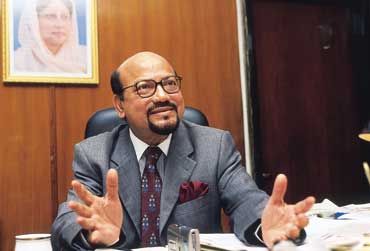 outlookindia.com
-0001-11-30T00:00:00+05:53
The last one month has seen Indo-Bangladesh ties hit a new low. First, deputy prime minister L.K. Advani alleged that after the regime change in Dhaka last year there has been an increase in the activities of the isi and Al Qaeda. Then, foreign minister Yashwant Sinha backed Advani's claim in Parliament. In an interview to V. Sudarshan, Bangladesh high commissioner Tufail K. Haider rubbishes the charges. Excerpts:

How much is India responsible for the current poor state of Indo-Bangladesh ties?
Well, I would not like to answer that question directly because I think it takes two hands to clap. It's not an issue of responsibility. But neither is calling names and blaming each other a starting point.

Can you amplify this?
The media overall in India as well as Bangladesh has been agog with these reports, charges and counter-charges—that's a war of words. And somewhat intermittently, the leaders on both sides, government officials, public leaders have also got involved. By and large, discussions should be carried through official channels and...