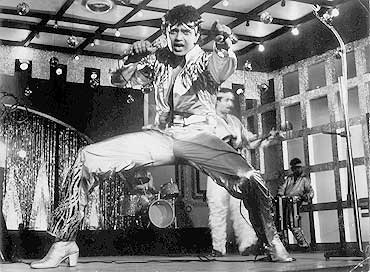 outlookindia.com
-0001-11-30T00:00:00+05:53
A buxom damsel is in grave danger of being assaulted by a gaggle of ruffians. Suddenly, a bottle rolls on the ground and a man appears on the screen. The hooligans ask, "Who are you?" In a voice that would make the blood of tigers turn cold, he says: Dikhne mein bewada, daudne mein ghoda, aur maarne mein hathoda. (I look like a drunk, run like a horse and strike like a hammer.)

What follows is carnage in which the evil men are reduced to their constituent sub-atomic particles. As the camera zooms in on the Man, the crowd rises as one, whistling and cheering, swinging their sweaty shirts in the air like rotors of mini-helicopters, while coins rain down on the screen.

The Man. The legend. Mithun Chakraborty. The star of all the stars.

Of course there are people who pooh-pooh Mithunda as a has-been, a reject from the Mumbai film industry who, after a moderately successful run in the mid-'80s as a disco star, vanished into obscurity and B-moviedom. With no disrespect to the Aamirs and Shahrukhs and Amitabhs, if they are...