With a string of flops behind him and many upcoming releases, Abhishek Bachchan wonders "mera number kab ayega" 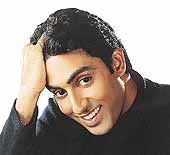 What was Sooraj Barjatya like?
Unbelievably fantastic. He's reinvented his creativity in MPKDH.

You've never said that about any of your films!
I feel it inside. Everybody, in every corner of India, will identify with MPKDH.

How was it like working with Hrithik?
Wonderful, he's so focused. We worked on scenes, discussed shots, saw the rushes together.

And Kareena?
She's fantastic. We just picked up from where we left off during Refugee. She's improving every day! It's a scary thought for co-stars (laughs).

How will you benefit from MPKDH?
It's always good to be part of a potentially big film. And MPKDH is going to be really big.

What about Mumbai Se Aaya Mera Dost?
I signed it a year-and-a-half ago. The director Apoorva Lakhia fought for me when everyone was...