India, Pakistan eke out a pact on terror that neither seems convinced about Updates 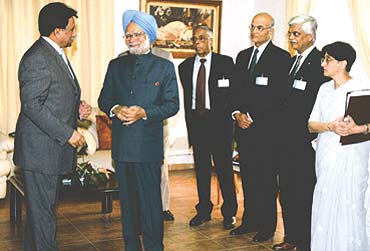 outlookindia.com
-0001-11-30T00:00:00+05:53
As PM Manmohan Singh read out the joint statement committing India and Pakistan to a new joint mechanism to address various aspects of terrorism, beside him sat Pakistan President General Pervez Musharraf, wearing a stiff and formal smile. Later, when Indian journalists asked him if he was satisfied with his meeting with Manmohan, Musharraf put a finger to his lips, indicating he was to keep quiet—odd for a man who’s usually garrulous, especially in such settings where he can indulge in grandstanding.

But the media persisted. Finally, he opened his mouth. "Usually, I enjoy talking to the media but this time I have decided not to say anything," he said, adding, "Whatever needed to be said has been said in the joint statement." Outlook prompted him: "Are you going to call the beginning of this new chapter of India-Pakistan dialogue ‘Mohabbat zindabad’?"

"Yes, Mohabbat zindabad," he replied without much enthusiasm. Irritation was writ large...